Seeing what's behind me 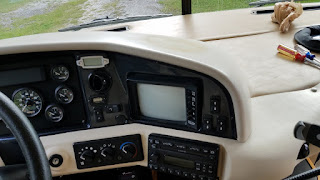 Yeppers, it's true.  And it seemed that the more that I used it, the "flakier" it got on me.  It was finally to a point that it wasn't working well at all.  I went online to see what was available.  There are LOTS of cheap color flat panel systems available on Amazon, but the reviews are a bit sketchy.  There are TONS of wireless systems out there, but the distance on these motorhomes from the front to the back leads to inconsistent video.  I opted (with the urging of my wife about safety) to go with a reputable DIRECT REPLACEMENT made by the same manufacturer (Weldex).  With a kit from RV CAMS, it was an easy swap out.

Now the really hard part....getting the dash apart and the old screen out.  Actually, it was super easy.  I removed 6 screws under the crown of the dash (right above all of the gauges and screens) and the top part of the dash came right off.  It was apparent that someone else had done this previously as all of the holders for the screws along the front of this cowling were broken.  That's ok.  I'll velcro along the front if needed.  Having it screwed in "inside" underneath the dash cowling was a stupid way to attach it. 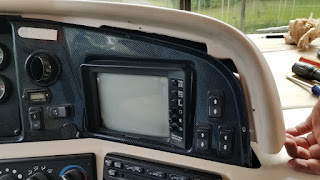 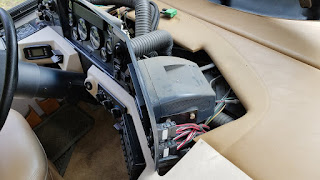 There are four large knurled screws holding the old unit in.  Just remove them, unhook the wiring, and then put the new screen back in its place.  RV Cams seems to be the only people who make this custom bracket to fit everything right back into place.  Nicely done!! 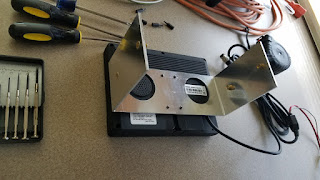 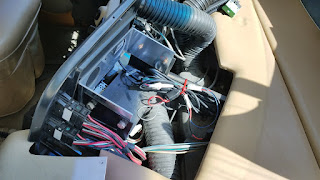 When's it's all back in place, it looks great!  I ordered a new color Weldex camera as well from Ryder.  The camera was $50 cheaper from them, and it looks to be a newer model.  It all went together perfectly. 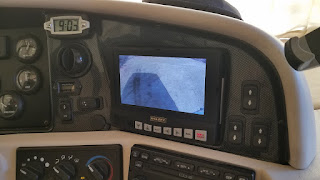 Email ThisBlogThis!Share to TwitterShare to FacebookShare to Pinterest
Labels: RV

Jeff and I enjoy genealogy - me for the puzzle to solve and Jeff for the travel excuse!!  But seriously, it is a great hobby for us to enjoy... 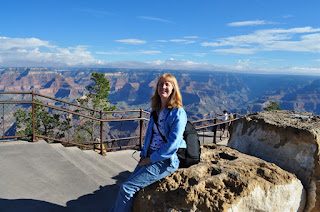